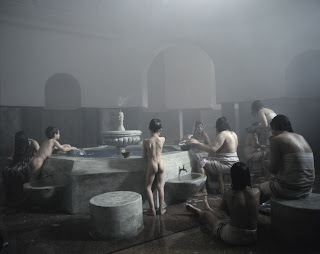 Plot: The 1953 Iranian Coup that brought the Shah into power as told through the eyes of four women

One of the many challenges facing Shirin Neshat in her directorship of Women Without Men is how to sell to an American and European audience an interesting engrossing story that is also an historical film that both explains the unique Iranian culture and shows the super power involvement that resulted in years upon years of violence; lack of freedom, and lack of democratic governance.

The main focus of this film is the 1953 Coup supported by the British and the CIA when the Shah took full control of the country including its army. The Coup shifted the Iranian society from a once democratic society to a type of dictatorship, severely monitoring the people through his secret police called Savak recruited from the rank and file of the neighbors /friends of ordinary citizens.

I remember as a child the images televised of the Shah riding into Iran to secure his power. He was so obviously old. I thought, why is the U.S.A. bringing him into power. Why him? That question remains........even today.

To determine answers to this question and many others Shirin Neshat uses women to bring Iran into the minds and hearts of movie goers is such a gentle way that says so much.

"This film is dedicated to the memory of those who lost their lives in the struggle for freedom and democracy in Iran - from the Constitutional Revolution of 1906 to the Green Movement of 2009."

Shirin Neshat raises the question of the veil, (chador) presenting it both as a symbol of liberation and of repression; When i see the women in my neighborhood wearing the veil I am in awe of their courage to dress so differently from others and yet, I fear the reason a women wears this garment has more to do with the dictates of her husband, of her religious/country of origin than with the image she wants to present to the outside world

In Women Without Men the garden (filmed/photographed with beautiful colors, textures) "is treated as a space of exile, refuge, oasis, where one can feel safe and secure" in contrast to the black and white scenes of street protest where "color is purposely drained, to give a sort of archival quality to the picture".

Thankfully there is no ambiguity about the theme of this film: politics through the eyes of women, the women who assert themselves into the streets, the voice, the mass presence of those Iranians who want what we here in America once enjoyed seemingly without restraint.

This is the power for change in Iran. Maybe a lesson, a way of life we will one day assume as our own

Women Without Men is a beautiful informative entertaining film that will live on as one of the pivotal moments in film
Posted by Linda Zises at 11:00 AM